Nowadays, ATGW [anti-tank guided weapon] munitions designed to launch from tank gun tubes make up a separate niche on the global arms market, where Ukraine is present with its anti-tank guided missile systems KOMBAT and KONUS. These precision-guided weapons, developed by the State Design Bureau Luch in Kyiv, are series produced by the Artem State Joint Stock Holding Company, also based in Kyiv. 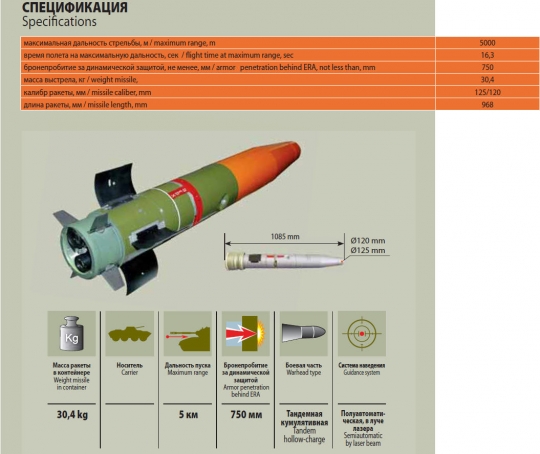 The KOMBAT laser-beam riding precision-guided missile can launch from the 125-mm smoothbore guns mounted on the T-72, T-80UD and OPLOT main battle tanks equipped with fire control systems compatible with it. The missile can be fired while both of the host vehicle and the target are in motion. Although the primary role of the missile is to engage main battle tanks operating at ranges beyond the effective range of the 125mm tank gun firing conventional ammunition, it can also be fired against other battlefield targets such as hovering helicopters or pillboxes.

The KOMBAT missiles can be loaded into the tank gun’s carousel-type automatic loader together with all other round types employed by the gun. The KOMBAT missile body consists of two parts: the head end/tandem warhead and aft end (accommodating sensor/control aids and propulsion), both being stowed in the automatic loader in the same way as conventional ammunition. The two parts get united into one body in the gun bore at the moment of firing. The missile’s tandem warhead enables it to defeat targets fitted with explosive reactive armor with a first-round hit probability of 0.8-0.9.

The KOMBAT has four fold-out fins at its extreme rear, and offers an effective range of 5,000 m which it covers in 17 seconds. With a mass overall of 30 kilos, the missile is far heavier than Russian counterparts, such as the 125mm REFLEX with a maximum range of 5,000 meters, and the BASTION which fires from 100mm rifled guns to ranges of up to 4,000 meters. A tandem shaped-charge warhead makes up almost half of the KOMBAT’s length, allowing a heavier explosive payload to be delivered to the target. The warhead weighs 9kg, including a 3kg explosive charge (it is by far heavier than the warhead featured in the REFLEX), contributing considerably to the missile’s armor piercing capability, which, again, much exceeds that of the REFLEX. The KOMBAT is a laser-beam-riding guided missile, the laser beam being directed onto the tail of the flying missile rather than on the target proper. The missile’s control system allows for a few guidance modes. One such is so called “lead-on” mode, whereby the laser beam is directed frontward the designated target without actually illuminating it. The laser beam is only brought into coincidence with the target (tank or helicopter) for 0.3 seconds prior to impact, effectively leaving the enemy with no time to activate a laser-warning system. At a range of 5.0 km, miss distance does not exceed 0.5 m. The missile has been accepted as standard issue for the Ukrainian Armed Forces.

The Luch Design Bureau has developed one more tank gun round, designated KONUS, which is optimized for 120mm standard NATO tank guns. The KONUS guided missile is built as a unitary round of the same size as NATO standard tank gun munitions, and it can be loaded into the tank gun’s carousel-type automatic loader together with all other round types used by the gun. The KONUS can be reconfigured for NATO-standard 120mm guns, which could help it to find markets in NATO countries and also would boost its export potential. ‘Westernized’ KONUS has already been tested on the T-84-120 YATAGAN main battle tank with the KBM2 L50 smoothbore gun of the 120mm standard NATO caliber. The KONUS has tandem shaped-charge warhead capable of piercing through 700 mm of RHA (Rolled Homogenous Armor) behind explosive reactive armor, using the guidance technique analogous to the KOMBAT’s.

The Ukrainian-designed anti-tank precision-guided missiles KOMBAT and KONUS are being manufactured by Artem in collaboration with precision engineering and chemical enterprises in Ukraine. The two weapons are available in configurations specific to tank guns of standard NATO calibers, which makes them suitable for use in military-technological cooperation programs with NATO countries and for advancement on markets in other countries employing NATO standard military equipment.