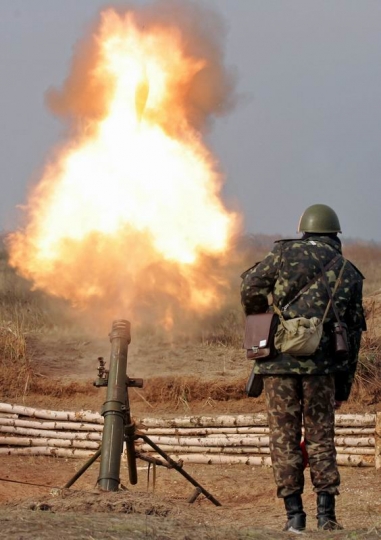 The State Enterprise ‘Artillery Weapons Design Bureau of Kyiv’ (SE AWDBK) has developed an 82mm lightweight mortar system designed to engage targets such as enemy forces, weapons, hardware and fortifications in the defilade. The mortar is a standard issue for special operations rapid reaction forces and motorized infantry elements of the Army. The mortar’s main defining feature is its reduced weight as compared to a standard same-caliber counterpart, accomplished through the use of titanium alloys in its construction.

In terms of its main performance capabilities, the newly-designed mortar is analogues to the 82mm mortar currently in service with the Ukrainian Armed Forces. The mortar’s barrel tube is of an alloyed titanium-based construction, allowing the overall weight of the weapon to be reduced considerably without compromising its overall robustness. Titanium is known for its high strength, its strength-to-weight ratio being less than 50% of the strength-to-weight ratio of steel. The obvious advantage of the lightweight design is that it is much easier to transport and faster to deploy for operational use, which is not an insignificant advantage on the modern-day battlefield.

The SE AWDBK could, with a sound reason, be considered a pioneer designer of alloyed titanium-based mortar tubes. The mortar system consists of a barrel, bipod, base plate, double loading prevention device, sighting device and a load of ammunition. The mortar is suitable to fire western standard 81mm mortar shells. The lightweight 82mm mortar development project, being pursued by the SE AWDBK as a private venture, has now reached the preliminary trial phase. In this context, it should be mentioned that the SE AWDBK is also the designer of the standard ‘heavy’ 82mm mortar system (developed, again, as a private financing initiative project) which was fielded with the Ukrainian Armed Forces in 1998. Mortar-type weapons are currently undergoing a rebirth, with a huge development effort being given to new mortar designs with a variety of barrel lengths and diameters.

Also, much significance is attached to the evolution of mortar shells, particularly proximity fuse technologies, enabling the shell to air burst at two to ten meters above the ground to provide a wider kill zone. Mortar-type weapons have seen an extensive use in anti-terror operations, (and, true enough, are repeatedly used by terrorists themselves), and will continue to be used in this capacity, as they demonstrate high efficiency in close-quarter combat, particularly in urban environments.