Ukrainian weapons designers have designed and built a comprehensive range of precision guided rounds in the 100mm and 115mm caliber categories, which have the potential to add significantly to mission capabilities of tank guns, both smoothbore and rifled. The new munitions are designed to defeat stationary and moving armored targets protected with state-of-the-art composite and explosive reactive armor, and are suitable for use in both ground-to-ground and ground-to-air roles, engaging with a high degree of efficiency hard targets on the land and low-flying air targets such as helicopters. Some technical solutions embodied in STUGNA were employed by the State Design Bureau Luch for the development of ATGM systems of smaller calibers. Luch has developed the anti-tank precision-guided missile R-111 STUGNA, which is designed to launch from the D10T 100mm gun on the T-55 tank, or the MT-12 antitank gun. 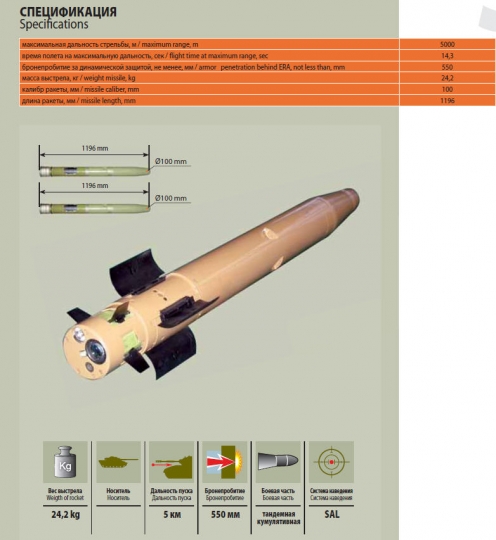 The T-55 tank still remains in service with many armed forces throughout the world, and its mission capability could be further enhanced with the STUGNA missile system. The STUGNA missile uses semi active laser beam riding guidance, and with its tandem shaped-charge warhead it is capable of penetrating 550mm+ RHA behind explosive reactive armor. The missile can engage targets out to 5,000 meters, with flying time to the maximum range not exceeding 14.3 seconds. The STUGNA missile has a 1,196mm-long body, and weighs no more than 24.2 kilos.

Apart from the STUGNA, the Design Bureau Luch has designed and built a comprehensive family of guided missiles with calibers of 100 mm, 105 mm and 115 mm. All of the precision-guided weapons use tandem shaped-charge warheads as effect generators, and, as is the case with all the other Luch missile designs, employ semi-active laser beam guidance. The missiles feature electrically-operated actuators controlled by an adaptive software-based control system providing high accuracy and the probability of success. Specifically for the BMP-3 [armored infantry fighting vehicle] application, Luch has designed a 100mm guided missile designated Item 210, with its technical characteristics and performance capabilities being a bit different from the STUGNA’s. The Item 210 missile can fly to ranges of up to 5,500 meters, and is capable of piercing through 750mm-thick RHA behind explosive reactive armor. The missile weighs 21.6 kg and has a 1,180-mm long body. The armament set for the BMP-3 AIFV includes a 100mm 2A70 launcher integrated with a 30mm 2A42 automatic gun. The launching system for the antitank guided missile 9M117 has semi-automatic laser guidance, and it can deliver the missile to distances ranging from 100 m to 4,000 m. With its shaped charge warhead, the missile penetrates 660-700mm RHA behind ERA.

The missile designated Item 105 has been developed by Luch specifically for NATO standard 105mm rifled guns, and there is also a missile design named Item 115. The latter is a 115-mm precision-guided round intended to launch from the gun mounted on the T-62 main battle tank. The Item 115 missile, weighing 25.2 kg and having 1,196 mm in length, engages heavily armored targets at ranges of up to 5,500 meters, piercing 550mm-thick rolled homogenous armor behind ERA.