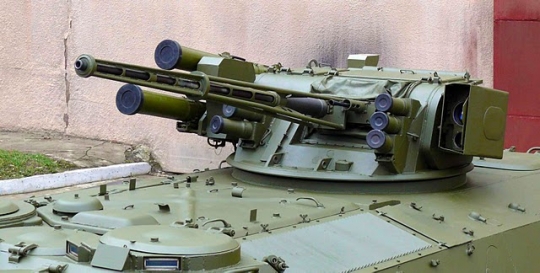 The State Enterprise Research and Engineering Complex ‘Precision Mechanics Plant’ in Kamyanets-Podilsky has launched series production of a comprehensive range of hand gun and artillery weapons, including the 30mm ZTM-1 automatic cannon (similar in its outlay design and performance capabilities to the 30mm 2A72 automatic cannon) and the ZTM-2 automatic cannon (Ukrainian designed equivalent of the Soviet-vintage 2A42).

The range of applications for the ZTM-2 cannon additionally includes the helicopters Kamov Ka-50/52 and the Mikoyan Mi-28N. The ZTM cannons can be reconfigured for integration with combat platforms of other types. The cannons can operate in repetition-fire or automatic-fire modes using an electric trigger.

The weapons are controlled mechanically or remotely (in the latter case, using, again, an electric trigger). The cannons deliver high-explosive [HE] or armor piercing rounds loaded from belt magazines stored in two ammunition boxes. Each of the automatic cannons is provided with up to 500 rounds of ready use ammunition. The ZTM-family cannons can operate independently or as part of the general-purpose SHKVAL remote weapons station mounted on AIFV platforms, in particular, the BMP-1U IFV and the BTR-3U APC. The guns are also suitable for installation on the BMD-1/2 ACV upgrades and other AIFV platforms designed by the Morozov Machine Design Bureau of Kharkiv.