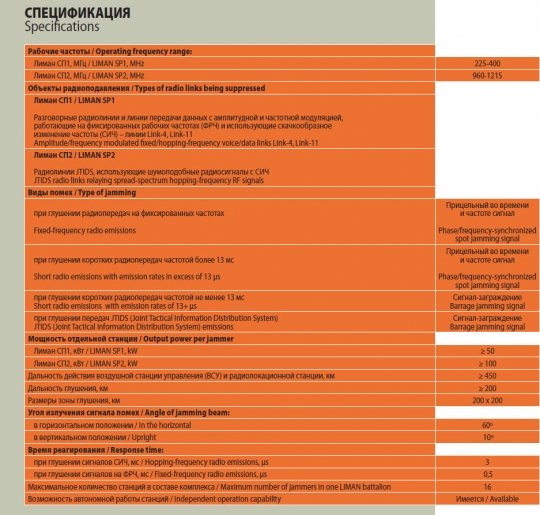 The importance of highly effective air defenses has recently increased dramatically in proportion to the value of combat aircraft in the modern-day warfare. The Complex Automation Research Institute (CARI) of Donetsk has designed and built a ground mobile air defense electronic countermeasure (ADEC) system which received designator LIMAN. The ADEC system LIMAN is designed to protect ground targets against aircraft attacks by means of jamming hostile aircraft navigation and radio communications links with airborne or ground support platforms.

The LIMAN automatically searches and intercepts radio communication and navigation-aid signals, whether fixed or frequency-hopping. It can jam a specific frequency or can be used to barrage jamming across a large portion of frequency band to deal with frequency-hopping (HAVE QUICK) systems.

The maximum jamming range is 450 km.

The number of jammers in a LIMAN battalion, which can amount to 16 units maximum, varies with mission scenarios and the combat objectives to be achieved. The system is truck-mounted on the chassis of KaMAZ, Ural, KrAZ, ZIL or similar platforms, and provisions are made for installing the system on the chassis of the BTR-70 armored personnel carrier. The jammers can operate either collectively or independently. The LIMAN ADEC system provides the interception and jamming of hostile aircraft radio emissions, enabling an air raid to be disrupted just before it actually beings. Its range of capabilities includes the interception, classification, friend-or-foe identification and jamming of aircraft communications and radio control data links with airborne mission support platforms at ranges of up to 450 kilometers, and robust suppression of hostile aircraft radio communications systems at ranges of up to 200 kilometers. This is a rapid-response system, with the time interval between the detection of hostile emissions and the start of jamming transmission not exceeding 3 μseconds. The jamming envelope covers a 200x200-km area if hostile emissions are coming from 4,000 meters. For low-flying air threats at altitudes of 1,000 m and 500 m, the jamming range is set at 100 km and 70 km, respectively.

The LIMAN ADEC system is understood to be a unique and all-capable means of neutralization and disablement of hostile radio systems, allowing terminal effectiveness of enemy combat aircraft to be reduced considerably.