The mobile PC-based optronic countermeasure suite KASHTAN-3 is a designed by the Kyiv-based company NII Kvant, which specializes in the design and development of optical-electronic counter-precision weapons systems. The KASHTAN-3 is intended for the protection of high-valued military and civilian installations against precision-guided munitions such as missiles, shells and air-launched bombs with semi-active laser homing systems. 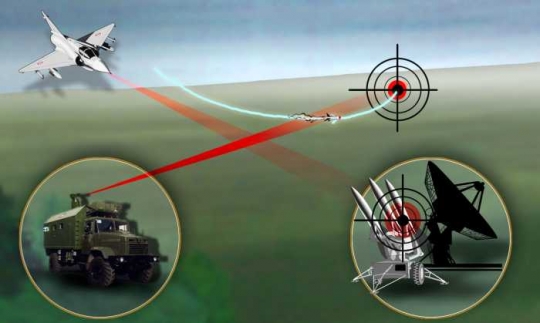 As is well known, the laser beam, by virtue of its physical properties, effective range, beam divergence, resistance to jamming and stability under unfavorable weather conditions, is a reliable means of target designation, making laser-guided munitions an essential component of modern-day weapons systems, ranging from a tank gun to aircraft-launched missile. The KASHTAN-3M designers set themselves the task of creating a system capable of effectively disabling laser-guided weapons. The KASHTAN-3M provides the detection and bearing of laser emitters, i.e. threat laser designators, defeating laser-guided precision weapons by way of discharging decoys and jamming their laser guidance systems. The KASHTAN-3 is capable of not only detecting a laser beam of a threat targeting system, but also of producing a more powerful false laser spot leading a missile or a bomb far away from their designated targets. The equipment in the system allows target designation data to be received from external information systems, and the output data to be transmitted to a higher automatic air defense system. The KASHTAN-3M employs various tactical defense algorithms specific to the composition and the number of attacking precision guided munitions, with the possibility of the decisions made by the system to be altered manually by the operator, if required. The equipment system also provides registration and documentation of the information about tactical situation, threat laser designator radiation parameters, the system’s behavior and operator’s performance.The KASHTAN-3 also supports training requirements for air defense units. It is fitted with automatic performance monitoring and fault location equipment enabling, among other things, indication and identification of faulted modules.

The system has undergone numerous trials held by NII Kvant jointly with military officials, during which it proved its high efficiency and performance reliability. In particular, all of the precision-guided bombs dropped on the ground and in the sea were diverted by the KASHTAN-3 to a safe distance from their targets. The designer claims that the KASHTAN-3M system can simultaneously handle from 20 to 30 high-precision missiles. This protective technology does not require expendable munitions to be used, as lock-on failure of precision-guided munitions is provided by means other than engagement of those munitions by fire, thus reducing considerably the cost of the use of the technology in combat. The KASHTAN-3M ECM system is mounted on the KrAZ-type cross-country truck chassis. The KASHTAN-3M system consists of retractable laser light detectors mounted on either side of the kung body, and a target-protecting laser-emitting decoy unit installed on the roof of the vehicle. Each potential target may be fitted with one, two, three or four such systems, depending on its layout, the degree of importance, dimensions and location. The system also includes a control panel, instrumentation consoles for target protecting laser-emitting decoy units (one console for each such unit) and a primary power source control and switching unit. Three sensors provide 360 degrees coverage in azimuth and -15/+90 degrees in elevation. The probability of threat laser detection is set at no less than 0.9 and deception-success probability ranges within 0.6 and 0.8 (both of the figures have been proved during lengthy trials). The system designers believe that what makes the technology so unique is not its equipment set, but rather the operating algorithms and software that were developed based on the results of a multiyear research of laser-guided weapons operations and tactics.