Practical training of flying personnel during mastering MI-24 helicopter and improvement of their flight skills.

Flight and engine controls of helicopter by dimensions and stroke correspond in full to real helicopter controls. Force on handles of transverse-longitudinal control and on treadles corresponds to real force on all stages and flight modes. Forces on step-gas levers at their shifting correspond to real forces.

Screen complex of projecting type is intended for displaying of situation outside of cabin.

Screen complex consists of screen composed of frame and curtain; projector and girder.

It is intended for carrying out of flights as leading in aircraft couple.

Playing up module is composed of: 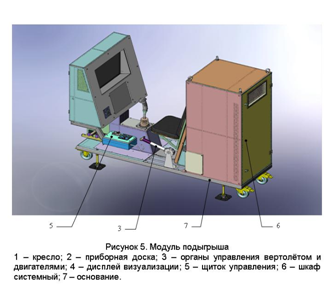