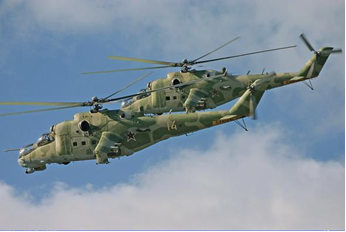 The helicopter is used to increase the firepower and mobility of land force troops, tactical landing, as well as for defeat of opponent armor by guided missiles “Shturm”, and other objects and personnel by unguided missiles, rifle and bombing armament. 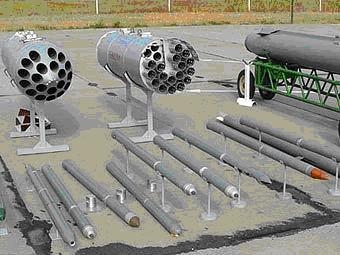 Helicopter armament consists of a built-in and overhead one. The first is the systemSPSV-24, which base is quadruple 12,7-mm machine gun YakB-12, 7 (9-A-624) rate of 4000-5000 rounds / min with 1470 cartridge ammunition. Operator controls the gun with the help of sighting station KPS-53AV-with collimator sight KS-53. On the handles of sight transference there are duplicative gun triggers. Simultaneously, KS-53 can be used for bombing.

A pendant arm is divided into unguided and guided. Unguided includes: NAR S-8 with a caliber of 80 mm placed in the block B-8V20A with 20 missiles each. Pilot makes NAR shooting a with collimator sight ASP-17B, which can be used for bombing and shooting of a machine- gun at fixing it along a helicopter.

The helicopter can take up to 4 bombs caliber 50, 100 or 250 kg. On inner pylons possible suspension of two FAB-500 bombs or incendiary tanks ZB-500, or containers KMGU-2 with cluster munitions. Possible combination of bombs and blocks of NAR (the NAR - only on internal pylons).

Weapons complex of helicopter provides the possibility of application up to 8 PTUR 9M114 antitank complex 9K113 "Shturm" (missiles not included). They can be placed on launchers devices installed in pairs under each wing tips, as well as on external pylons. Shooting is performed by aiming the optical set "Raduga-Sh" and radio link management command in the semi-automatic mode. PTUR sight ocular is located on the starboard side of the operator’s cockpit. Launch range 9M114 - 5000 m.